The Chevrolet Corvette has had numerous concept prototypes made to explore the design alternatives for the vehicle. Most of these concepts never made production but they give a glimpse of the future direction of the design. The Astro I was one of these designs. The car was designed under the direction of Bill Mitchell but the actual work was led by Larry Shinoda. The design originated from a sketch drawn by Bill Bowman while he was in Hank Hagga’s Chevy 2 Studio. Mitchell selected the sketch and instructed the design to be developed into a running car. Bill Bowman was sent to Larry Shinoda’s off-site studio called The Warehouse to develop the car with several modelers and an engineer. Mitchell was the driving force behind the development of the car and it was Larry’s job was to make sure that Bill developed the car on Mitchell’s schedule. The design team felt the car was developed off-site so the car could be raced at 24 hours of LeMans race because of the high-output Corvair motor in the car. General Motors had banned all corporate sponsored racing at this time and used the “off-site” studios to develop their racing products away from scrutiny. 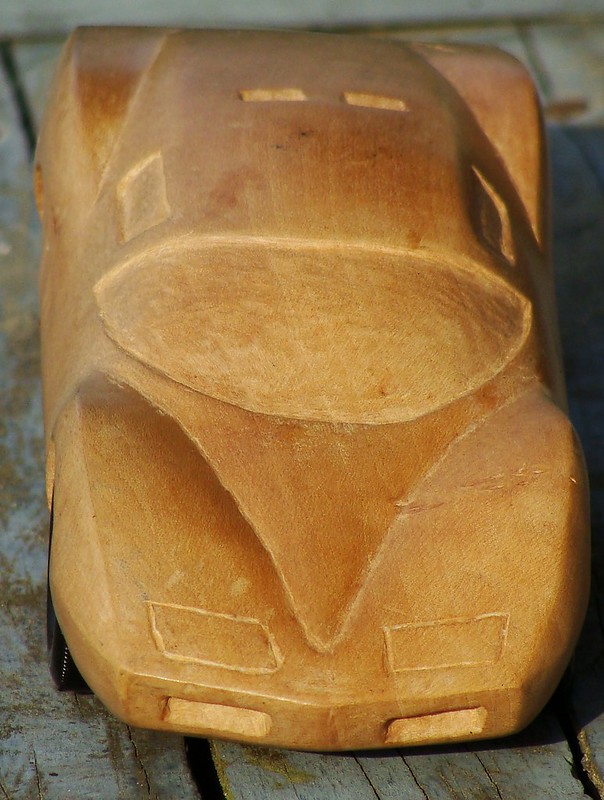 The purpose of the Astro I concept was to design a car with the lowest drag coefficient possible. This was achieved by a low roof line, a small frontal area and a relatively high rear end. Engineers wanted to study aerodynamics knowing that the frontal area and shape were major factors to determine the drag coefficient in high-speed air, but this was a new area of study when this car was created. The running prototype was built but the aerodynamic properties of the car were never proven. The Astro I resembled the Mako Shark show car and predicted the shape of the 1968 Corvette with twill rectangular grills and hide away headlights on the leading edge of the hood. The rear featured pop-up panels for air braking and air extractors on the rear deck that vented the engine compartment heat. The small tail lamps were located in simulated vents on the rear of the car. The overall height of the car was a low 35.5 inches, so conventional doors would not work. A clamshell entry system was designed where the entire body behind the windshield was one piece that lifted up and backwards with a large screw mechanism. The two bucket seats would rise to help occupants get into the car. Once the driver and the passenger were inside and strapped in, the clamshell lowered down and the seats lowered back into position so the driver could use the aircraft inspired control panel and the twin stick steering wheel to operate the car.

  The low profile of the car eliminated the use of a conventional V8 engine so a special horizontally opposed six-cylinder Corvair air-cooled motor was developed, but this was never promoted. The Corvair flat-six engine was used because of its height and it was fitted with a special cooling system using three centrifugal blowers which also kept the height low. The motor featured a single overhead cam valve train, hemispherical heads and inclined valves with a pair of three barrel inline carburetors. The castings design placed the carburetor barrels right over the ports for the fuel mixture to have a straight shot at the valves. The Astro I also featured independent suspension, four wheel disc brakes and special custom control arms at each corner of the car.

The Astro went from a final sketch to a running prototype in five weeks and the Astro I was one of the rare instances where a designer’s vision became a running car with no changes. After the racing program was canceled, the Astro I became a show car. Although the Astro I never ran, it was a huge hit for both Chevrolet and the GM Styling team. The Astro I was never intended for a production car but it included a variety of innovations that made their way into production. The Astro I Concept debuted at the New York Auto Show in 1967 and was shown around the country afterwards. I remember when I was growing up that new cars were introduced in September of each year with a big advertising campaign and new cars would always be on display at the Mall so shoppers could see the new offerings. I remember on year that Chevrolet had a special show that featured the Astro I with the latest cars for the next model year, and my father took me to see it at the local Mall. This was the first concept cars I had seen and it left a lasting impression on me. I remember the color of the car was pink, although most of the photos I have found of the Astro I are red and black. The car was shown with the clamshell opened so you could look inside and I remember dreaming about what it would be like to drive such a car because it was the most fantastic car I had ever seen. The car was the highlight in a show that traveled to various cities. I remembered the car for years, but never heard of the Astro I again after that car show left town, but I did not forget that pink silhouette that left such a lasting impression on me.

I had made several Pinewood Derby race cars before 1994 and I felt that I understood the process and I began to branch out and look for innovative designs to use for my race cars. I searched various magazines and books for designs to carve because I had limited access to the internet at the time. I remember that I came across a picture of the Astro I in a book on experimental Corvette’s and I remembered the car and was determined to make one. I remembered the car of my childhood was pink and I wanted to make one the same color. I had made a bright pink Cadillac from a piece of Dogwood and I found a cut limb in a trash pile and took it home to make the car. Dogwood is very hard to carve and it has a tendency to split and check because the wood held water. The piece I carved the car from was a block I had cut from the limb that split down the middle. The Astro I was so short, that I was able to make the car from the section that was left intact. The wood was very hard to carve and took a long time to make, but I was able to carve the fine details since the dense hard wood made a tight precise edges. The Astro I was created as a Pinewood Derby race car and the dimensions for the car a based on those racing specifications. The pattern for the design was made from visual observations from pictures and no specification information was used. The wood was hard to carve and I remember struggling to get the details carved on the rear of the car. This was during a period where I began to add more details to my work. I sanded the car smooth with #600 grit sand paper and hand-buffed the bees wax finish for a lustrous shine. The bright pink wood had no exotic grain and has a nice even color that emphasized the details in the body.
  The car looked great and it performed admirably. Dogwood is a very dense wood so the car was very heavy and ran very fast on the track. The Astro I was the fastest car in the preliminary races, but the 1967 Mustang made from Oak beat it after a wheel repair. The Astro I was the second fastest car at the McIntosh City Races in 1994 but one of the best looking of the cars I carved that year. 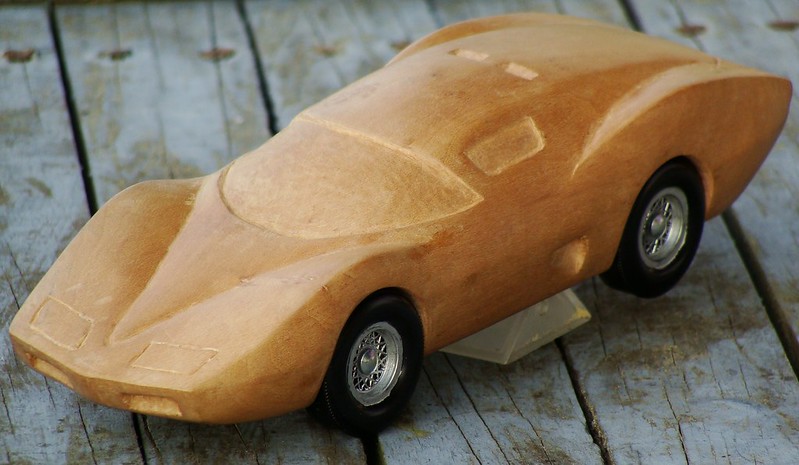